Concerns About School Safety Driving Teachers to Quit or Transfer

The 2021/2022 school year has seen growing tensions boil over into increased school violence. Students have not faired well after a year or more of remote learning, and students, teachers and administrators are suffering. Clear, consistent supervision and discreet surveillance coupled with physical security can lower risk and change the perception of safety and security.

After schools used distance learning completely, or in part, there were 202 shootings on school grounds in 2021, up from 92 in 2020. This trend has not slowed with 55 shootings reported in the first quarter of 2022.

Campus Safety reports, "nearly half of the teachers surveyed said they want or plan to quit or transfer their jobs due to their concerns about school climate and safety, while 34% of school psychologists/social workers, 29% of staff, and 31% of administrators said they want to or plan on quitting or transferring due to school security and climate issues." 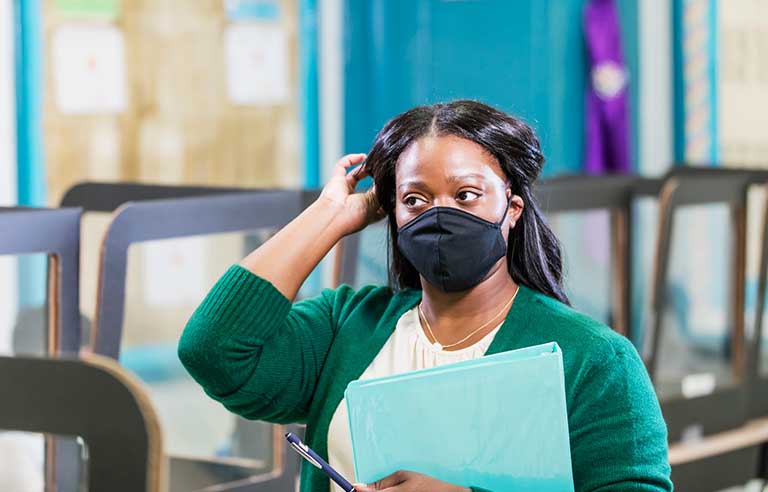 Further, many school districts have cut or eliminated police resource officers, for example Los Angles schools cut police presence 30%. The reduction of resource officers will eliminate one barrier to violent aggression in a school.

In Las Vegas, Jonathan Eluterio Martinez Garcia repeatedly attacked his teacher for nearly an hour, inside the classroom, after an unscheduled visit to discuss his grades. Lack of a panic button was cited as a reason the attack was not stopped sooner.

This was not the first time teachers experienced violence, threats or intimidation in Las Vegas schools. "The Clark County School District – the fifth largest in the country – has seen 5,700 calls for service regarding fights, batteries or assaults and 1,300 combined incidents where arrests and citations had been issued on school campuses since the start of the school year," according to CCSD Police Chief Mike Blackeye. In response, Clark County leaders reversed a planned reduction in school security personnel, adding more safety officers. Concerns persist. As of April 19, 2022 the Las Vegas Review Journal reported, "The promised cameras in classrooms were not installed, panic buttons had not been given to staff, one point of entry for students had not been enforced and campus security monitor positions were not filled or properly funded."

As frustration grows, a critical loss of staff looms, security concerns must be addressed head on.

A single point of entrance for screening students and guests at a controlled checkpoint, is one strategy that lowers the risk of violence. Often referred to as a security vestibule or mantrap, the entrance to the school is restricted through a set of two doors - an exterior door which can be opened remotely, a check-in window between for screening, and a second set of interior doors which only open after the visitor has been screened.

Safe zones and rooms into which teachers and students can retreat when threatened provide an additional layer of protection.

Depending on the requirements of the school’s threat assessment and security plan, various types of equipment and building materials may be recommended by an architect or engineer for installation in existing spaces or as part of new construction. Each item will have its own specifications and installation requirements. In many cases, these can be integrated into existing buildings, replacing windows and doors, and upgrading walls. Adding fixtures such as drop boxes, package receivers or bullet-resistant reception desks and lecterns can further reduce the risk of harm. Covenant Security Equipment offers a variety of products for improving school safety and security.

Take the first step. Contact a Covenant Security Equipment advisor at (866) 286-4400 to discuss effective options and configurations which fit your budget.

Added to your cart: